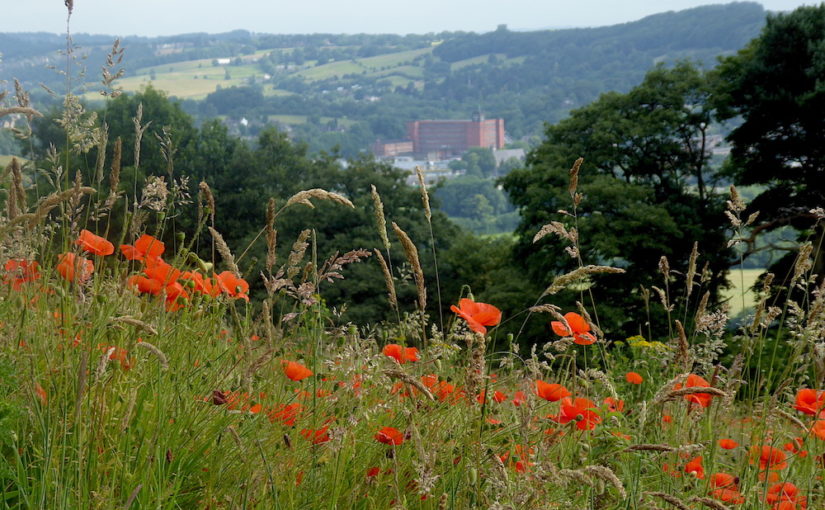 Once again this year Belper will enter the RHS Britain in Bloom competition. The competition is now over fifty years old and is entered by communities in towns, villages and cities with different categories for each size of settlement. Groups are assessed for their achievements in three core areas: Horticultural Excellence; Environmental Responsibility; and Community Participation. Over 1,600 communities around the UK enter each year, participating in their local region’s  “in Bloom” campaign. From these regional competitions, roughly 80 communities are selected to enter the national Finals of RHS Britain in Bloom. 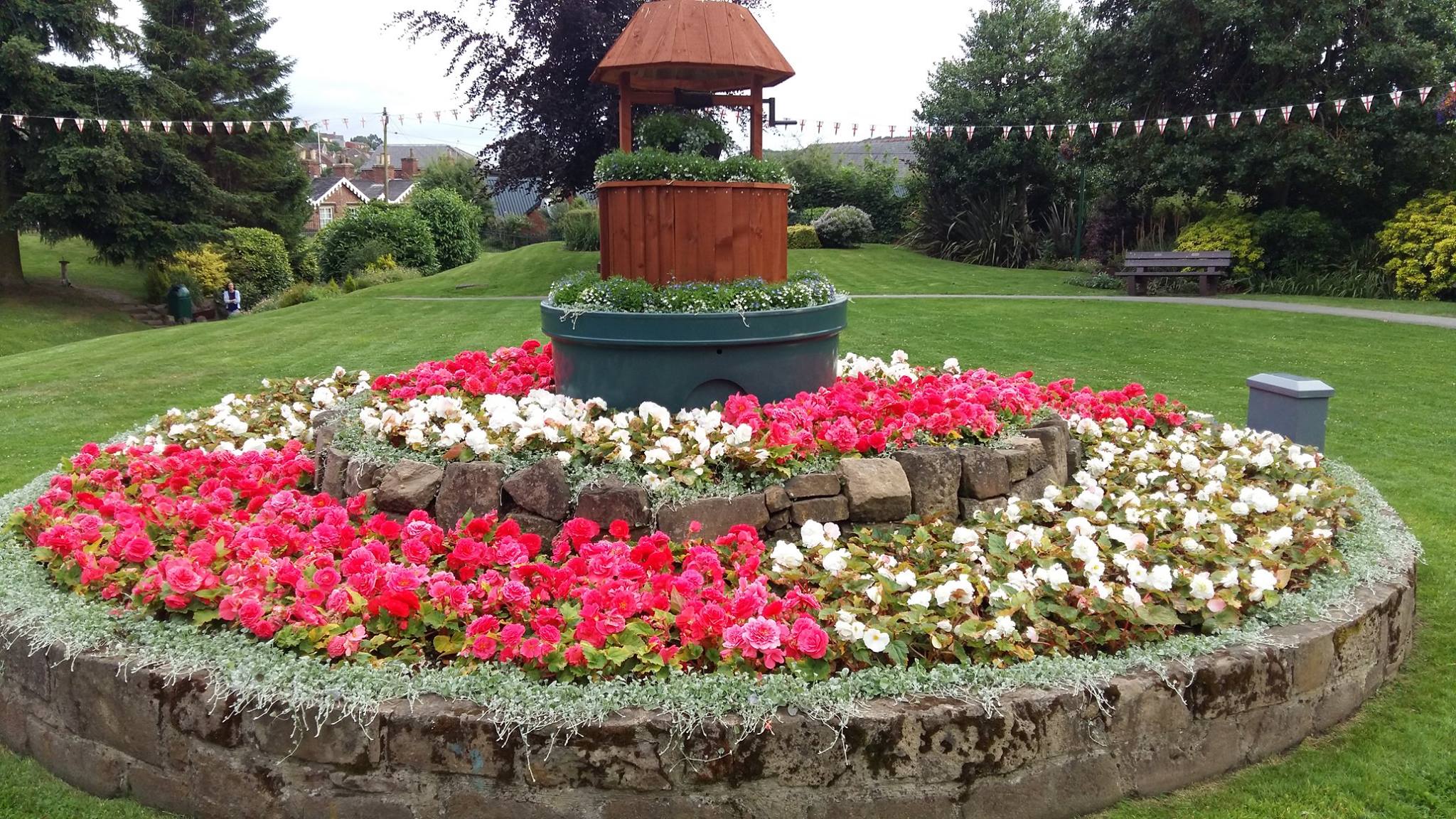 Last year ‘Belper in Bloom’  was selected to represent the East Midlands in the Large Town Category in the Royal Horticultural Society (RHS) Britain in Bloom UK Finals.

Andrea Van Sittart, RHS Head of Community Outreach, reacted by saying: “Congratulations to Belper on reaching the UK Finals of this year’s RHS Britain in Bloom campaign. To represent their region on the UK stage is an incredible achievement and shows they are already at the top level of community gardening, going the extra mile to improve their local area and make it cleaner, greener and more beautiful for everyone.”

Belper has numerous  volunteers and groups who get involved with the towns involvement in Britain in Bloom. These include Belper Gardening Group, Transition Belper, the Open Gardens Team, Belper Goes Green, Friends of the River Gardens, Guides, Brownies, Scouts, local schools and for the first time this year St Peter’s Parish Community Garden. As well as volunteers, the staff at Belper Town Council and Amber Valley Borough Council, will be working to make Belper bloom. Once again this year they will be planting thousands of bedding plants in the parks and planters in and around the town, putting up hundreds of hanging baskets, keeping Belper Railway Station and the grounds of Strutts looking beautiful and keeping the Parks, Wyver Lane and other Nature Reserves accessible and well maintained.

This year as part of the town effort the Belper Woollen Woods are asking  local people who can knit, crochet or felt to make flowers which will be used to brighten up part of the route that the judges will walk along. 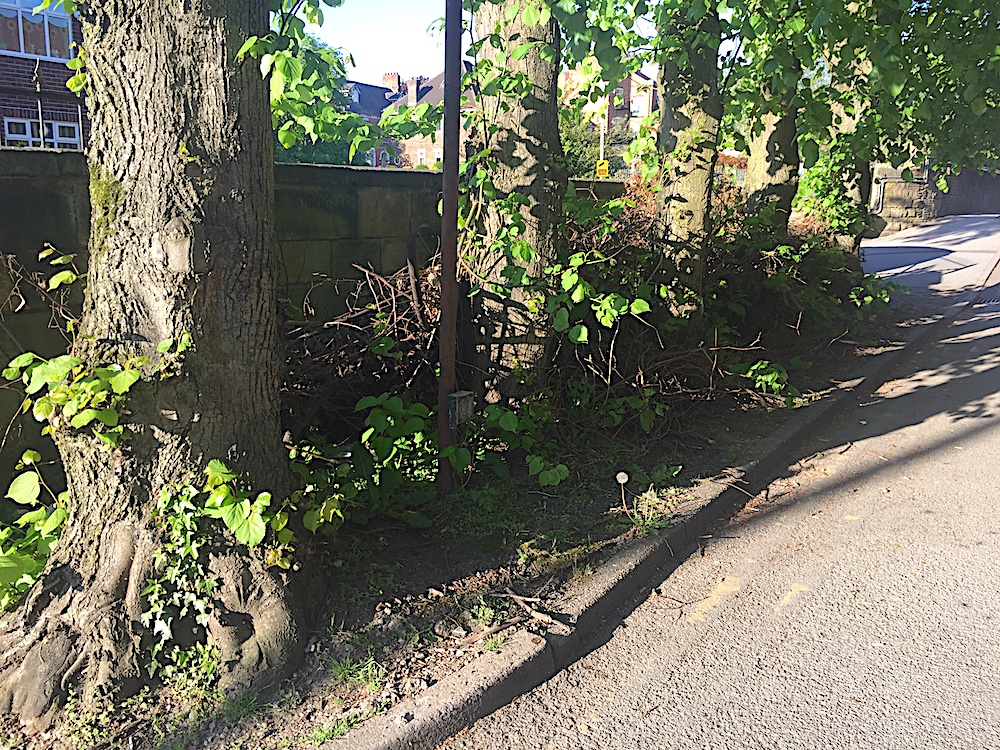 Belper is a fantastic town full of residents willing to be part of Community events. So I am asking everyone who reads this to help make flowers for the Belper in Bloom Group. There are plenty of free patterns on the internet that can be used for events such as this.

I am a knitter so I am adding a few quick and simple knitting patterns to this blog post. However flowers can be crocheted or made out of felt. 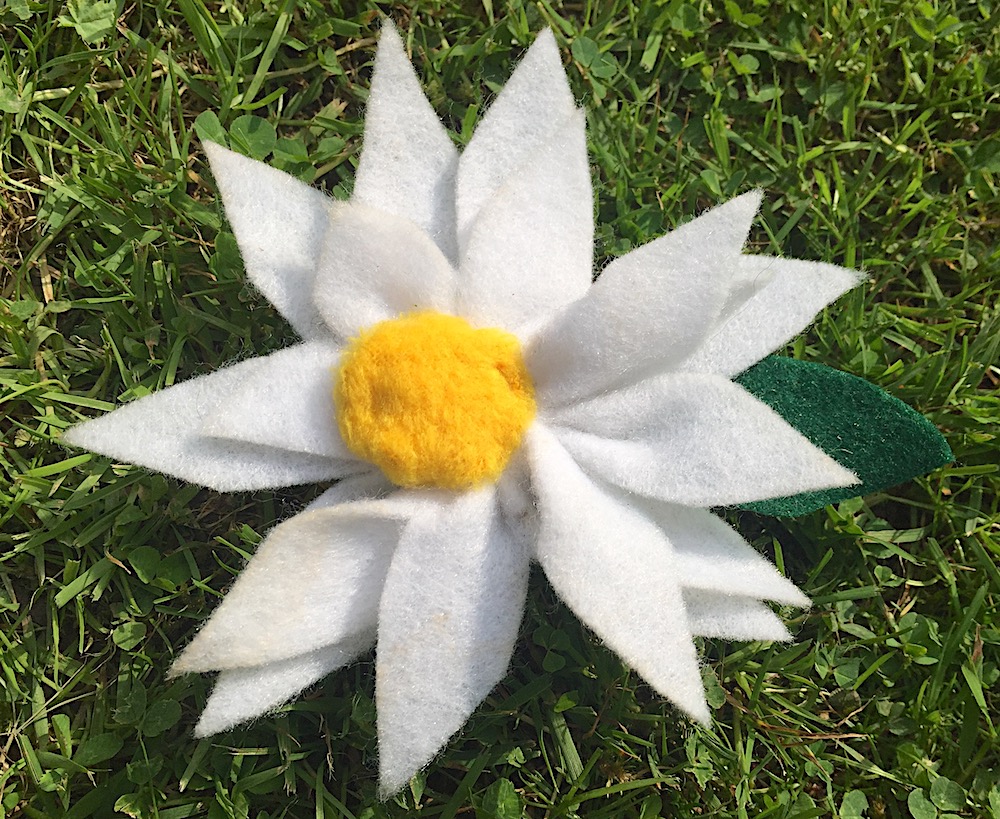 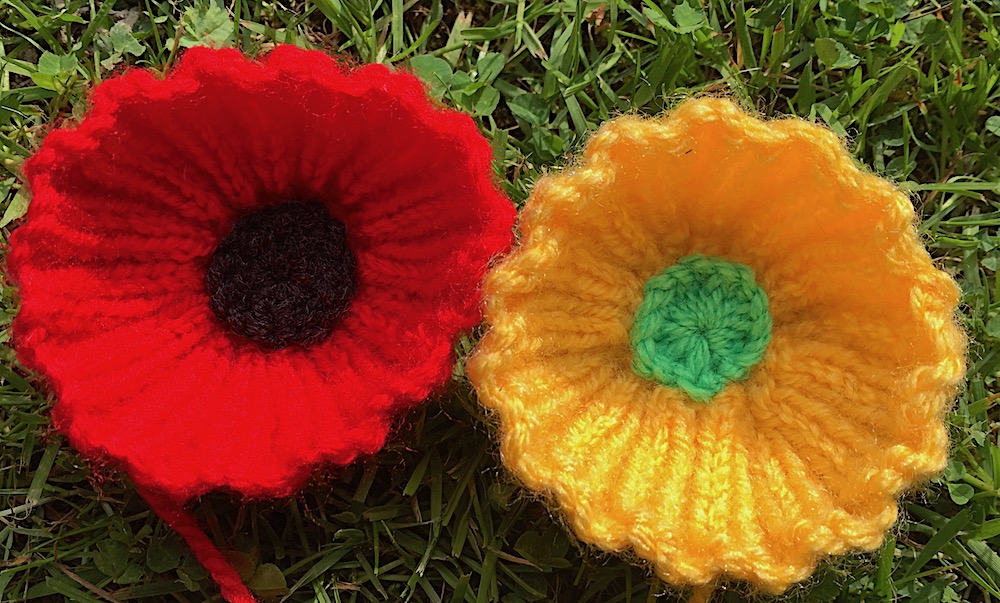 Body of Flower Using Col A Cast on 60 stitches
Rows 1 –10 : K2, P2 across whole row. Row 11 : Knit 2 stitches together across the row (30 sts).
Row 12 : Slip 1 stitch, Knit 2 stitches together then pass the slip stitch over… repeat across the whole row (10 stitches).
Break off yarn with long tail and thread back through remaining stitches and pull tight. Join edges with mattress stitch

Centre of Flower Using B, cast on 20 sts, knit 2 rows, cut the yarn and thread through all the stitches. Pull the thread tight and sew base to the centre. 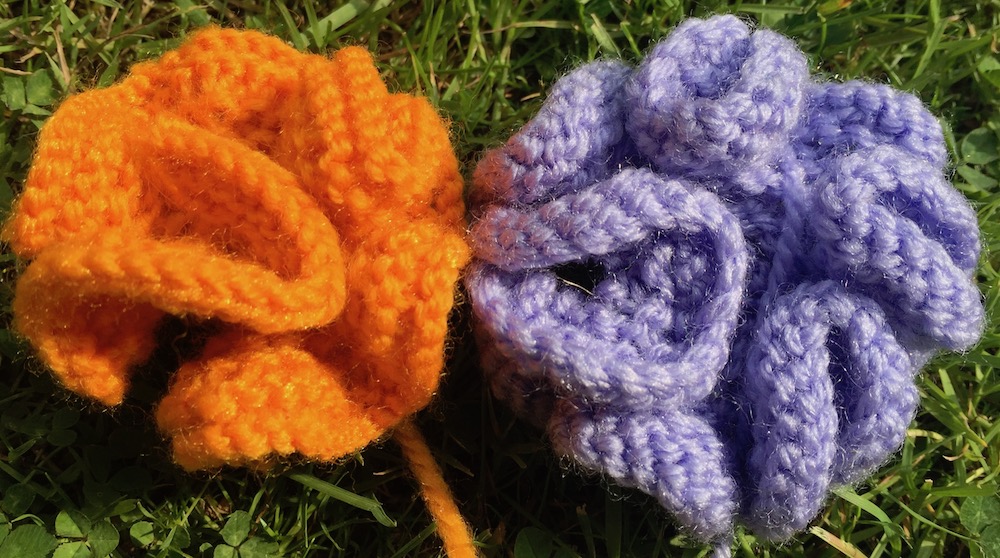 Knit two together across the next row (10 sts)

Break off yarn with long tail and thread back through remaining stitches and pull tight. Join edges with mattress stitch.

The flower will naturally curl to make an interesting shape. 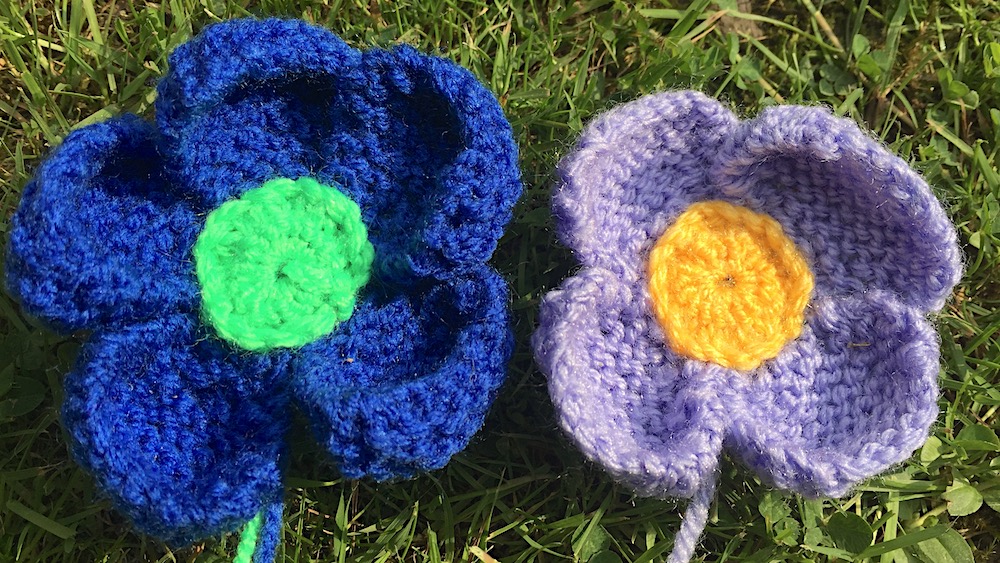 Make three or four more petals to complete the flower.

Sew lower sections of petals together by threading a length of wool through all five petals and pull up tightly.

Cut the yarn and thread through all of the stitches and pull to make a circle, sew onto the centre of the flower. 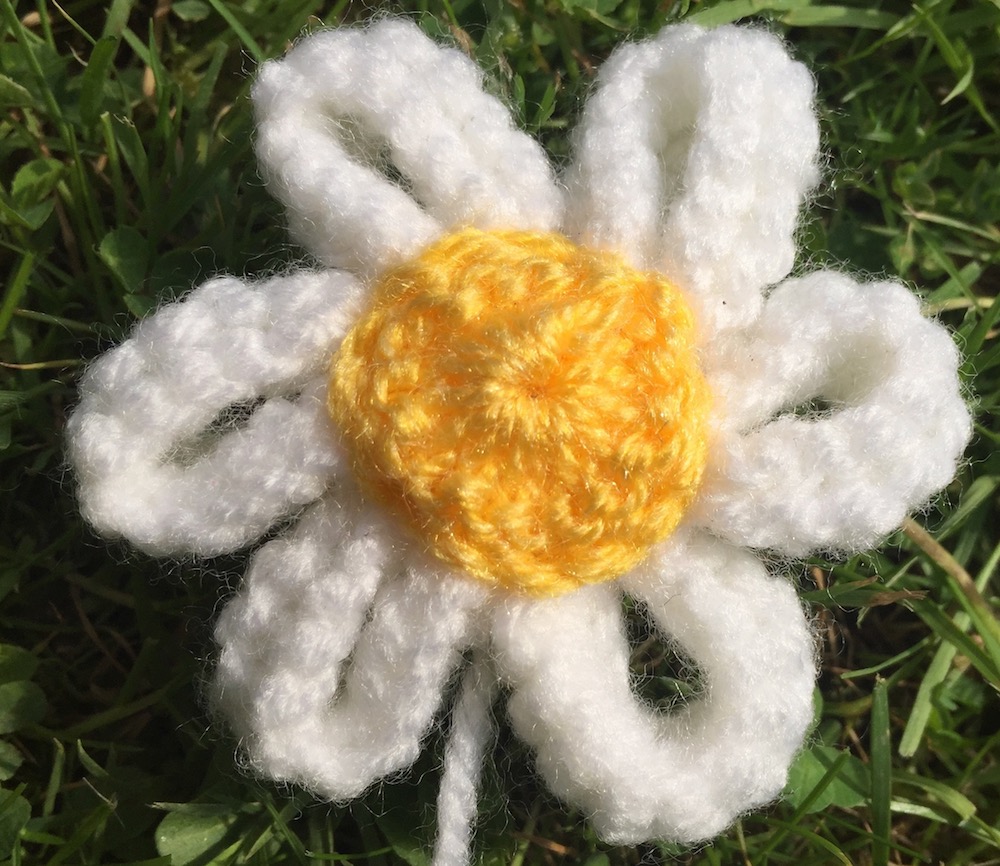 Cut the yarn and thread through the remaining stitches and pull up to make a flower that looks a bit like a daisy. Put in a few stitches to hold in place.

Flower Centre Cast on 20 sts. Knit 2 rows. Cut the yarn and thread through all of the stitches and pull to make a circle, sew onto the centre of the flower.

It would be fantastic if lots of people would help with this effort and we do not have very long before Britain in Bloom. The completed flowers can be left in a box in St Peter’s Church Chesterfield Road, Belper or given to me Anne Clark

4 thoughts on “Belper in Bloom”