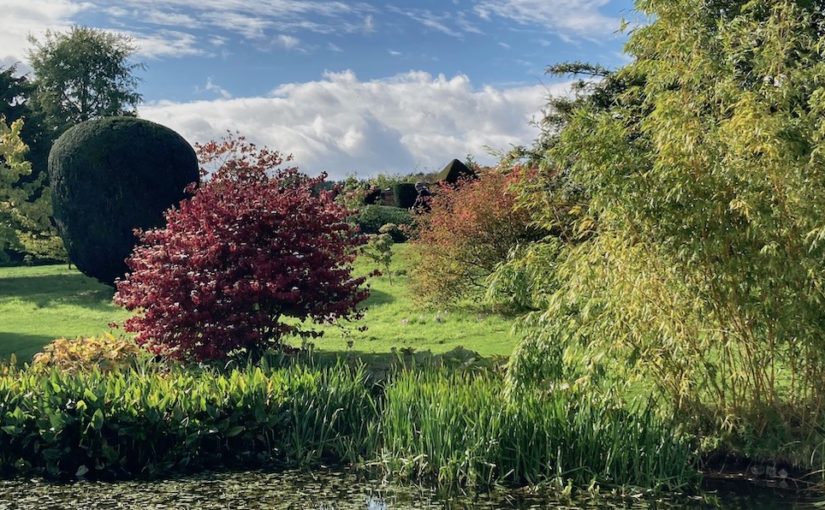 I love to visit the beautiful gardens of Felley Priory. Felley Priory like Dale Abbey was reputed to have been built on the site of a small hermitage. Unlike Dale Abbey no one is sure where the hermit’s dwelling had originally been. The Priory of Felley and the Priory Gardens are situated just half a mile from Junction 27 of the M1 and 16 miles from Dale Abbey.

Felley Priory was founded in 1156 dedicated to Our Lady. It consisted of twelve canons following the Rule of St Augustine. Like Dale Abbey the priory was not always managed well and in 1276 its prior was deposed for mismanagement and misbehaviour. He had permitted the priory buildings to fall into disrepair and, ‘the canons had erred and strayed to the scandal of the neighbourhood.’

At the time of the Dissolution in 1535, not all of the Priory was completely destroyed. Parts were used elsewhere in the construction of the house and garden, for example, on the west side of the house between the Tudor door and chimney. The pillars at the entrance to the garden were originally part of the Priory Church and date from the late 12th Century. The house was plundered during the Civil War and became an army garrison and Royalist stronghold.

The house and its 2.5 acre garden are nestled in beautiful countryside of Nottinghamshire. The house is the private home of the Chaworth-Musters family who have owned it since 1822 and as a private house is not open to the public. Although you cannot see inside you can walk very close to both the front and back of the property which makes a very attractive backdrop to the beauty of the gardens.

The gardens have many rare and unusual plants and have been planted so that there is colour and interest all year round. The garden now covers the site of the Priory Church. The high garden wall to the south west is believed to be part of the priory boundary wall. The central part of the house was constructed in the 16th and 17th centuries and there is a particularly fine example of a Tudor chimney on the west side of the house.

In Spring the orchard has a carpet of daffodils some of which are extremely rare and which were recently the subject of a detailed article in The English Garden Magazine. In late spring the nearby woods are full of bluebells.

In Summer the walled rose garden is filled with old fashioned roses. Under the old Elizabethan wall are many agapanthus and some tender shrubs. The borders around the old walls have a mixture of trees, shrubs, geraniums, hostas, digitalis and meconopsis. In the centre of the garden there are pergolas covered with roses, vines, clematis and lonicera. There is a knot garden made up of architectural box and yew topiary birds. This area was one of the first parts of the garden to be established and was designed to reflect the age and brickwork of the priory itself.

There is still plenty to see in the Autumn. A collection of hydrangeas provide wonderful autumn colour and the flower borders are still full of many colourful flowers such as the white and purple asters.

Felley Priory has a fully stocked plant nursery, from which you can buy many of the plants seen in the garden. On this visit I resisted buying any but have done so on previous occasions. The Farmhouse Tea Room offers a delicious selection of snacks, meals and drinks. We enjoyed a cup of coffee with a cheese and onion roll followed by a piece of lemon cake.

For information on opening times of the gardens and tea room please visit the Felley Priory website www.felleypriory.co.uk 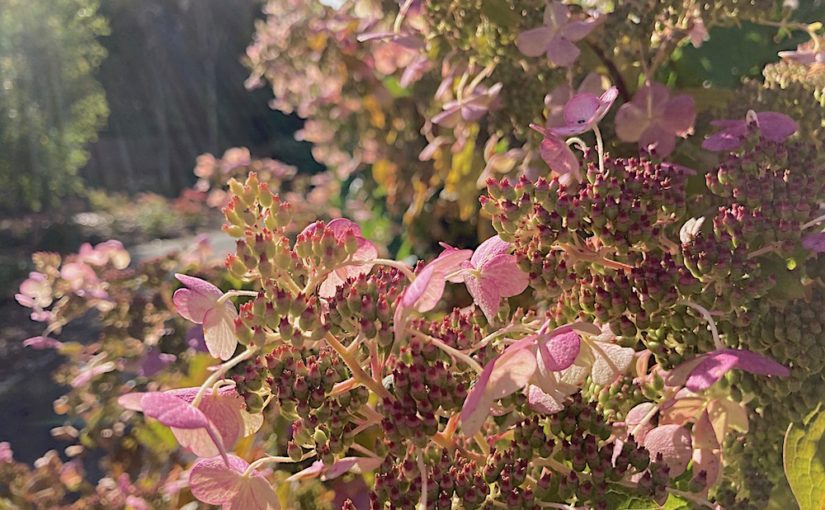 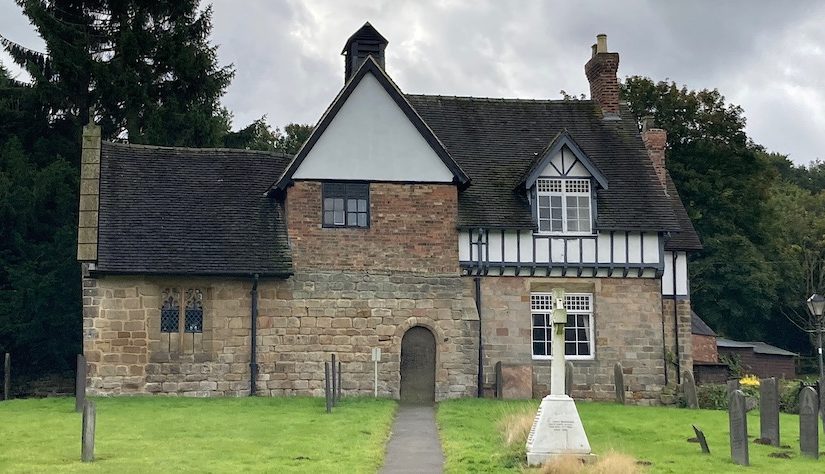 The stone from the abbey was eagerly seized upon by local builders. Only the great 13th century east window remains, which probably has much to do with the ancient belief that if the arch fell the villagers would have to pay tithes. Today the abbey ruins are designated as an ancient monument.

Parts of All Saints Church date back to 1150, when the hermit started to build his chapel and house on the site. The church is the only one in England to share its roof with a farm. At one time it shared it with the abbey infirmary and later with the Bluebell Inn, when the connecting door from the church was said to lead from ‘salvation to damnation’.

The church is very unusual and nothing seems to quite fit, it has reputedly the largest chalice in England. The pulpit leans at a sharp angle and it is possible to sit in one of the box pews with your back to the minister.

Hermit’s Wood is an ancient woodland and probably formed part of the original forest that once covered this area. It contains many fine beech and oak trees. Abundant wildlife and over 60 species of flowering plants have been recorded. The Hermit’s Cave is now designated as another Scheduled Ancient Monument, and it is worth taking a good look at the view from this point.

Tattle Hill in Dale Abbey is said to have got its name from neighbourly ‘tittle tattle’ amongst the householders. On this road is a thatched barn once the up-market residence of four cows.

Friar’s House in the village dates from about 1450 and is open on Sundays and Mondays trading as a cafe during normal times. To check their opening times please look at their website. Friar’s House Dale Abbey.

Lastly a few more photographs from our visit.