I am sitting enjoying a cup of tea after an enjoyable, exhausting weekend making part of a ‘What if Machine ‘ at Derby Silk Mill Museum. It was such a fun experience that I wanted to record it straight away. To explain,  a What If Machine is based on the idea of creating a very complicated machine to cause something very simple to happen. These type of machines were drawn by Heath Robinson in England and  Rube Goldberg in America. Neither illustrator made their machines but have inspired many to try.  Wallis and Grommet films have some fantastically complicated ideas for achieving simple tasks. 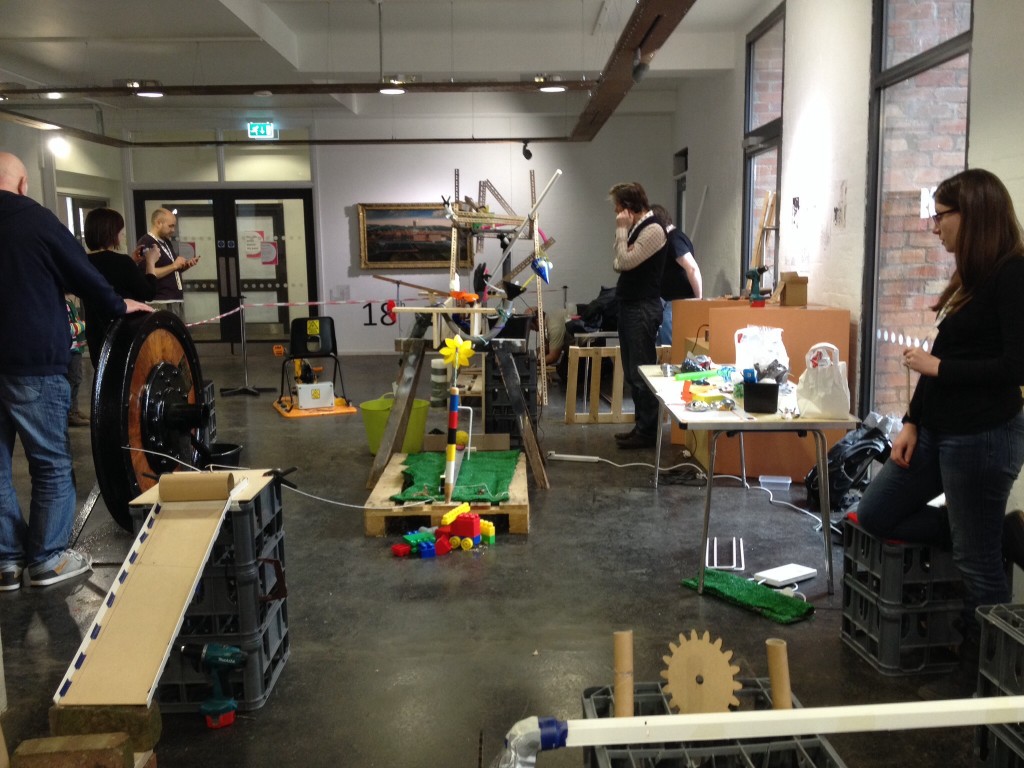 The Silk Mill museum in Derby hosted its first What If Machine in 2012 (the year of the Olympics ) and this year decided to plan another, inspired by Derby Museum’s Heath Robinson exhibition. Teams of people were invited to take part over the weekend of February 14 – 15  2015. The teams arrived at the museum on Saturday morning and were given a box of useful items such as masking tape, string, marbles, golf balls, tennis balls, a funnel,  straws, clothes pegs etc. Each team could help themselves to other items from the museum workshop such as wood, lengths of guttering, cardboard tubes, table tennis balls, wire, paper plates .

We were invited to draw out a plan of how we intended our machine to work. Since we had not done this before it was difficult to draw out a plan without knowing what we were going to make, so we decided on a sectionional approach, testing as we invented. The first part was the most difficult. 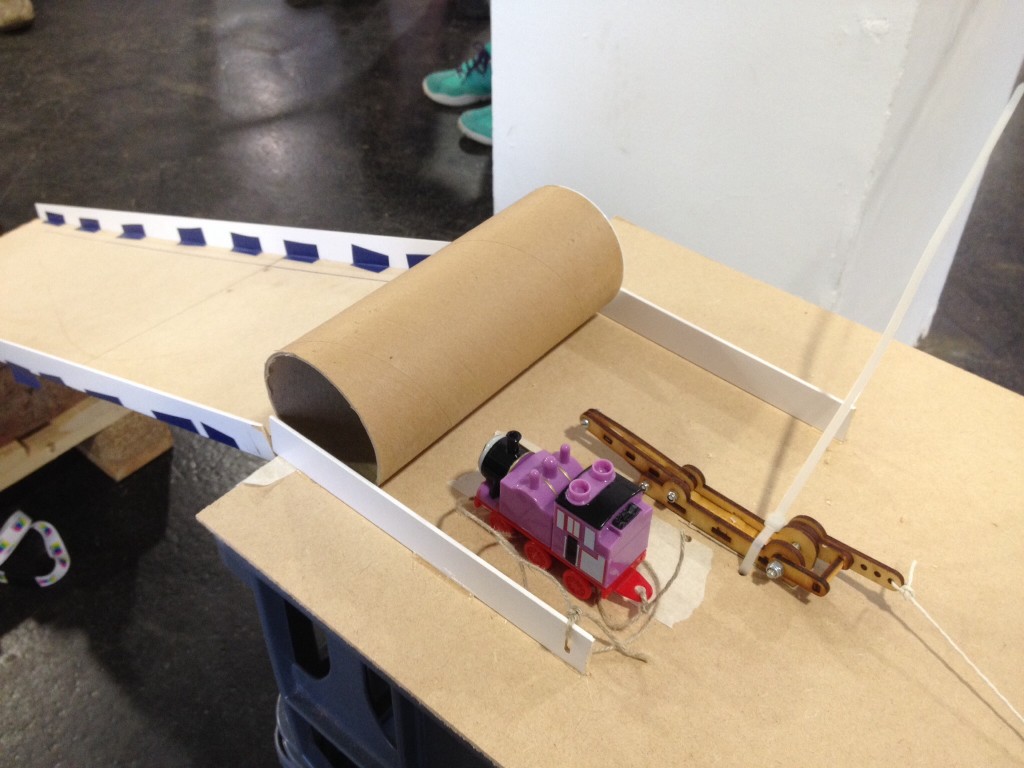 We wanted our section to start with a switch that pushed along a toy train to bang into a cardboard roll containing a tennis ball. This would roll down a slope  and be stopped at the bottom by a brick. The stop would  cause the tennis ball to roll out of the tube along a track made from guttering. To begin with our roll kept bouncing over the brick but eventually we managed to get the stop at the correct angle to achieve what we wanted.

Our ‘What If Machine’  continued from this point to include a stack of paper cups, a pulley that emptied 8 marbles down a shoot, which then knocked a golf ball onto the floor. The golf ball was attached to a paper bowl which tipped to release a large marble down a tube. The idea at the end of the tube was for another golf ball attached to some string to fall down and flip a switch. This then opened a peg to release some string and set off the next chain reaction part of the ‘What If Machine’. 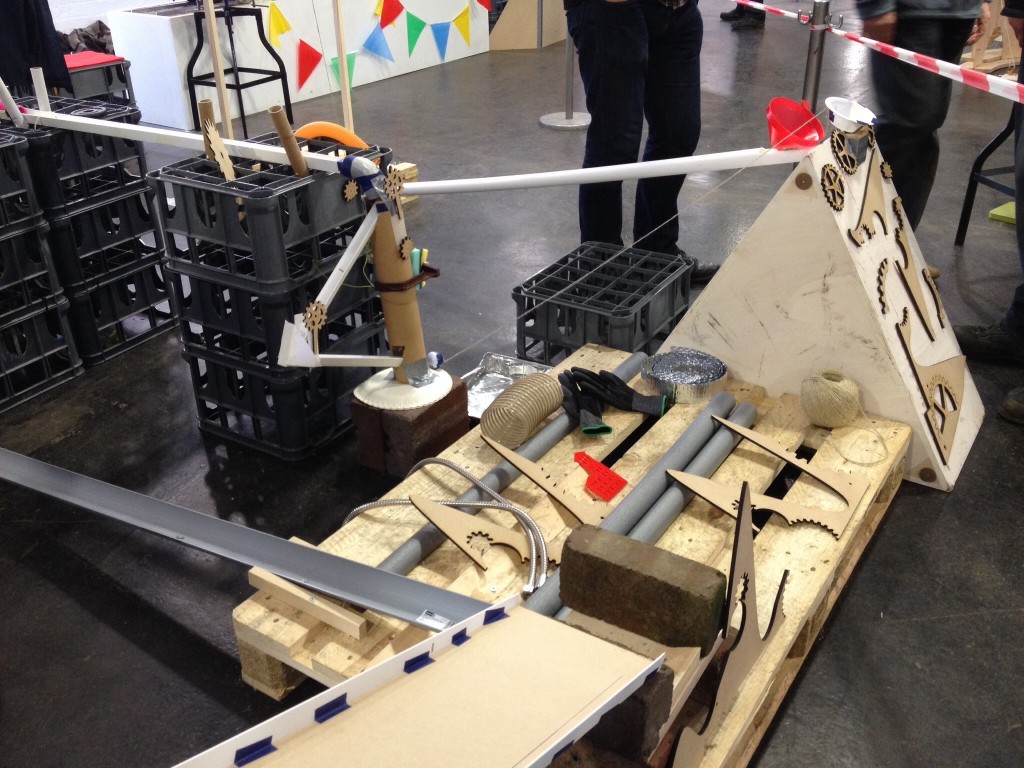 There were five teams completing different sections of the ‘What If Machine’ which ended by releasing a helium balloon. Each section was very different with some amazing ideas, including water filling buckets, switches setting off computers and trains running along tracks. 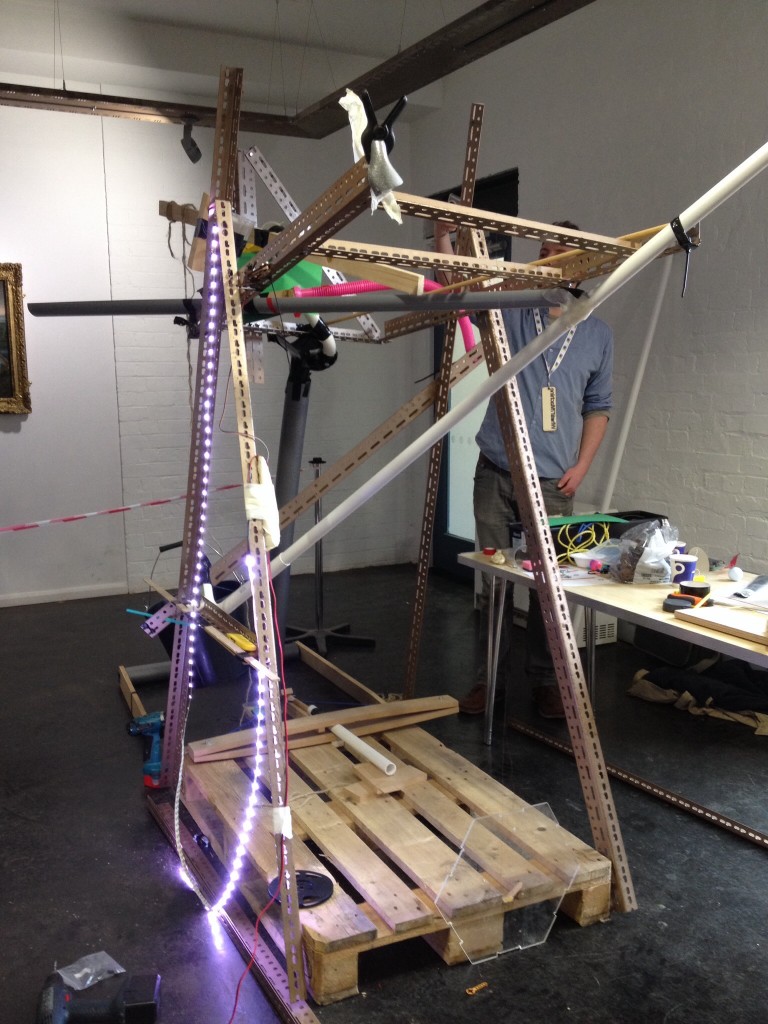 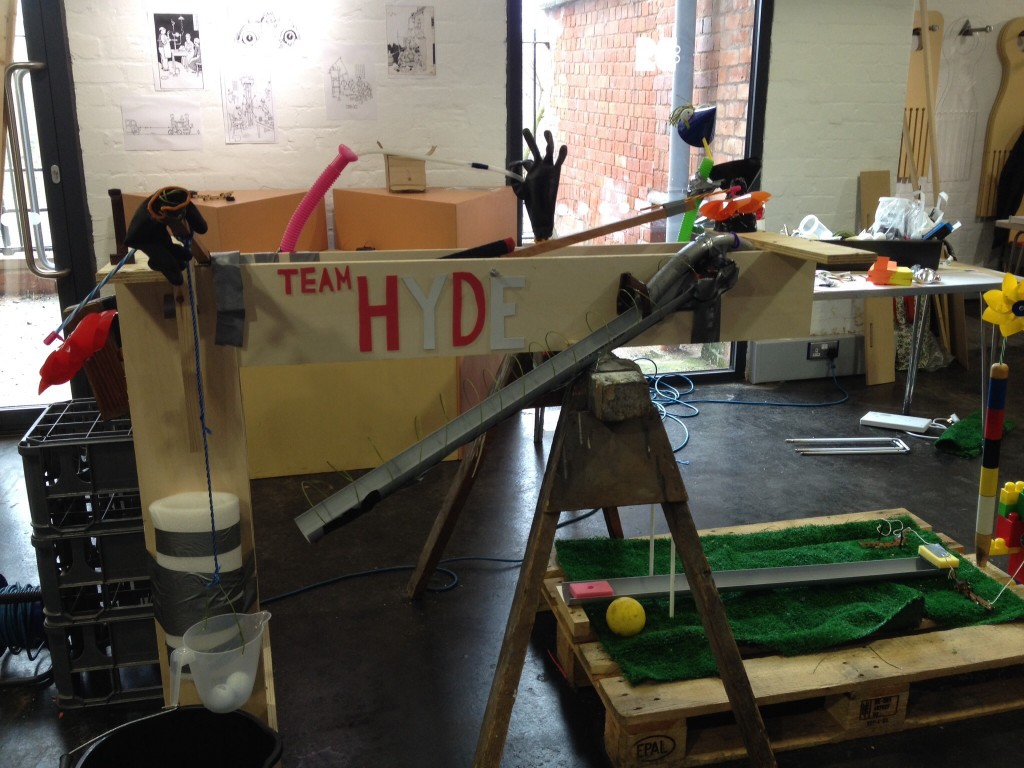 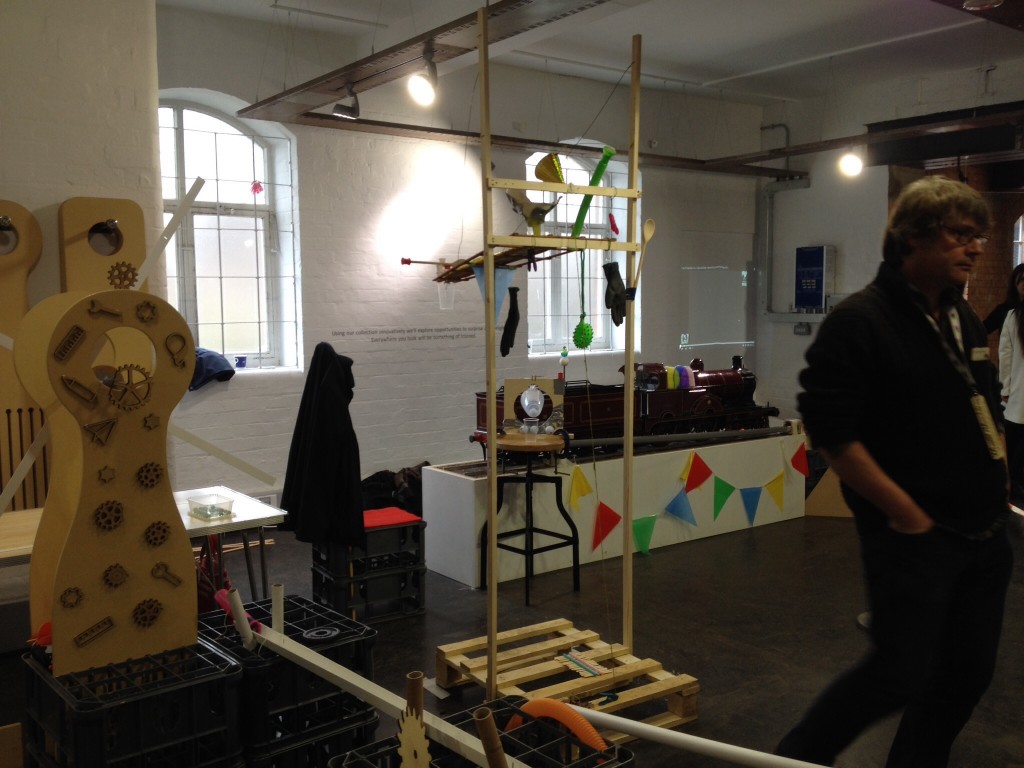 The bulk of the work was achieved on Saturday, and then Sunday was spent making final adjustments. We then demonstrated the finished versions which were watched by members of the public.

On Sunday  lots of cameras were in evidence as many of us  tried to capture the machines and excitement of the day.  Every part of the ‘What If Machine’ was sketched by illustrator Sally Thompson. 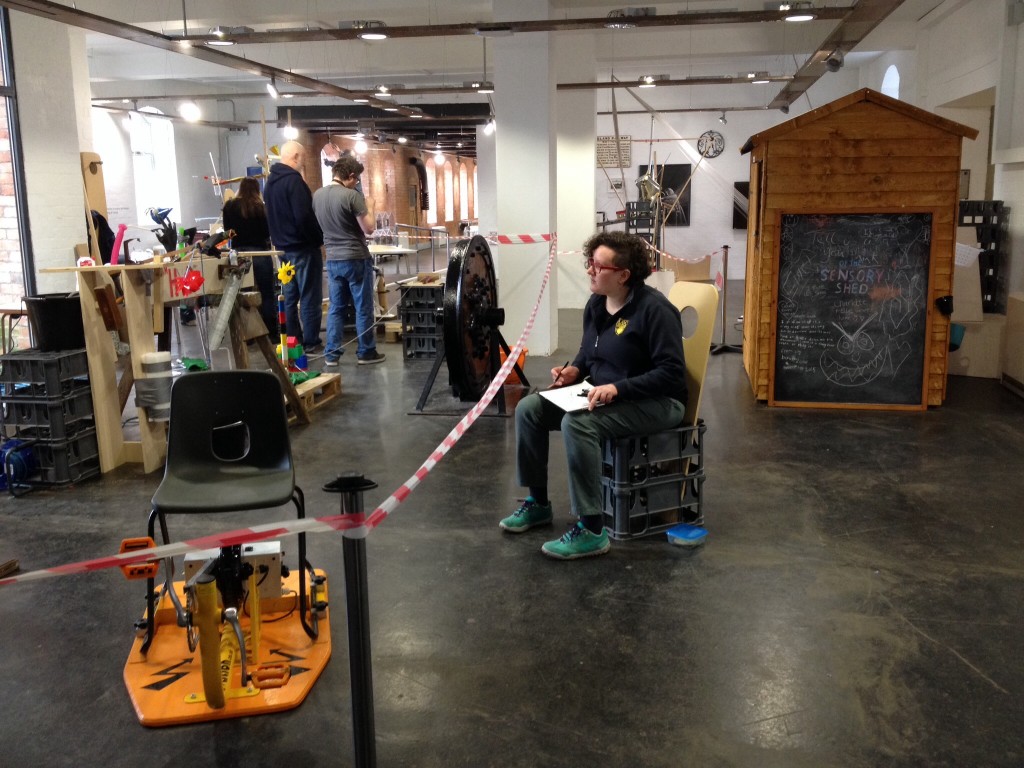 The sketch for our machine (shown below) followed the Heath Robinson approach,  and may well have been our starting point, had we had the idea in our heads from the outset!  This felt very appropriate since our involvement was inspired by sketches viewed at Derby Museums a couple of weeks ago.

The event was organised by Derby Silk Mill and Dominic Morrow was on hand to mentor and help to make sure that the machine completed its task to raise the balloon at the end.