I have just spent an enjoyable, challenging and exhausting weekend joining in with the Global Service Jam at Quad in Derby. It is the first time that I have ever been involved with something like this so I am giving some feedback on how I found it. To start with, here is some background information on what a Global Service Jam involves. The global bit is easy, it takes place all over the world on the same weekend or as near to that as is possible. This year over 100 cities joined in with Jam sites existing on six continents. On the poster below you can see the Derby Ram just over halfway down.

Secondly who can take part? The simple answer is anybody, the official Jam site says, ‘There will be designers, students, academics, business people, unemployed people, customers, mums, kids and grand-dads.
The idea is that groups of interested people get together to design a service that they believe someone somewhere may want. Everyone is given the same theme which could be a word, phrase or a picture and from that work in groups to design something. You can get much more information from the Global Service Jam website

In Derby the Jam took place at Quad  situated on the market Place. We arrived on Friday March 7th at 5.30pm to meet the others who were taking part. There were drinks, introductions and then at 6.30pm we watched the video that gave us the theme for the weekend. 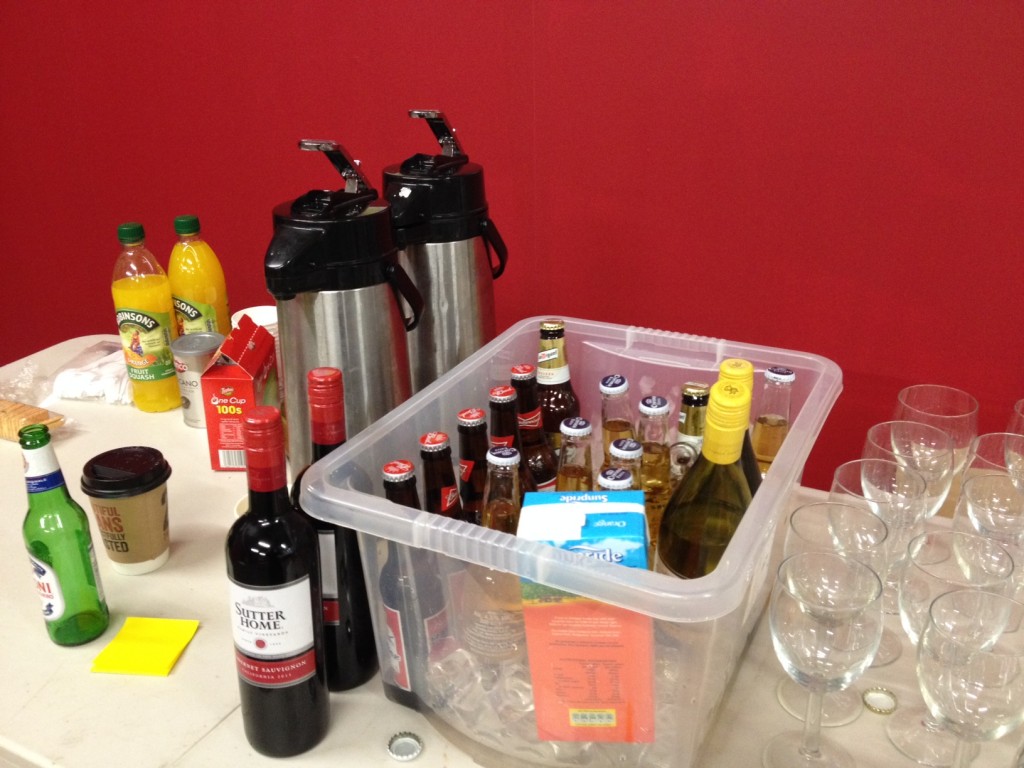 This year the theme was a diagram which to me looked like a box that had been taken apart and flattened. As a group we sat and wrote numerous ideas on post it notes about what the theme brought to mind. We then compared and grouped these together to try and formulate some group ideas.

Friday night we left Quad about 9.00pm and went home with brains buzzing with thoughts and ideas. Saturday involved more time working out three different ideas which were then refined down to the one we ran with. This idea was pitched to the other group and Mentors and was then taken outside Quad to talk to the public about and get their feedback. Luckily all the feedback was positive so then as a group we needed to start to plan how this service would work in practice.

Our plan was to provide a comfortable environment where people could meet to make friends and then go on to plan their own social events. We had used the idea of the box as everyone of us lives in our own home or box but many people for numerous reasons in our modern world don’t know many people that they can interact with in a social way. We decided the location could possibly be a pub or a cafe.

As a group we started to work on different aspects of the service. There was an app to design, a paper leaflet, a badge and a website to consider. As part of the whole process we started to think about the sort of customers this service could attract and wrote Persona’s for them. All the work was loaded onto the Global Service Jam website and this needed to be completed by 3.00pm Sunday afternoon . Both Derby ideas and the work done by each group can be seen HERE.

On the Global service jam website you can also see all the work completed by every Jam site and it does make very interesting reading. It is amazing to see how many different creative ideas have been produced from the same starting point.

As part of the whole process we were encouraged to make prototypes not to just talk about our ideas. Doing not Talking. The part I personally really enjoyed was making models of the different situations our customers could find themselves in. I hadn’t realised how much fun could be had making people from pipe cleaners and locations from cereal boxes.

One of the group I was working with said she was really enjoying the fact that a group of people were all working on the same project but each one had a different job to do according to their strengths.

When the work was completed each group pitched their idea to a panel of judges who then asked some very searching questions! A winning group was announced. It wasn’t the group I was part of but in the end it was the taking part that was interesting and worthwhile and I would certainly do it again. There was a real feeling of achieving something.