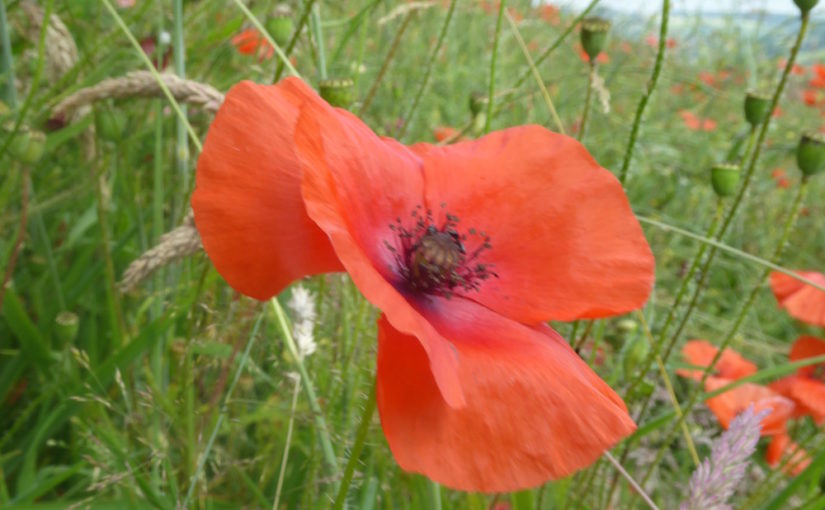 A love of nature and the horror of World War One are not usually thought of as being connected. However having read the book ‘Where Poppies Blow’ by John Lewis-Stempel, I realise there is a connection. 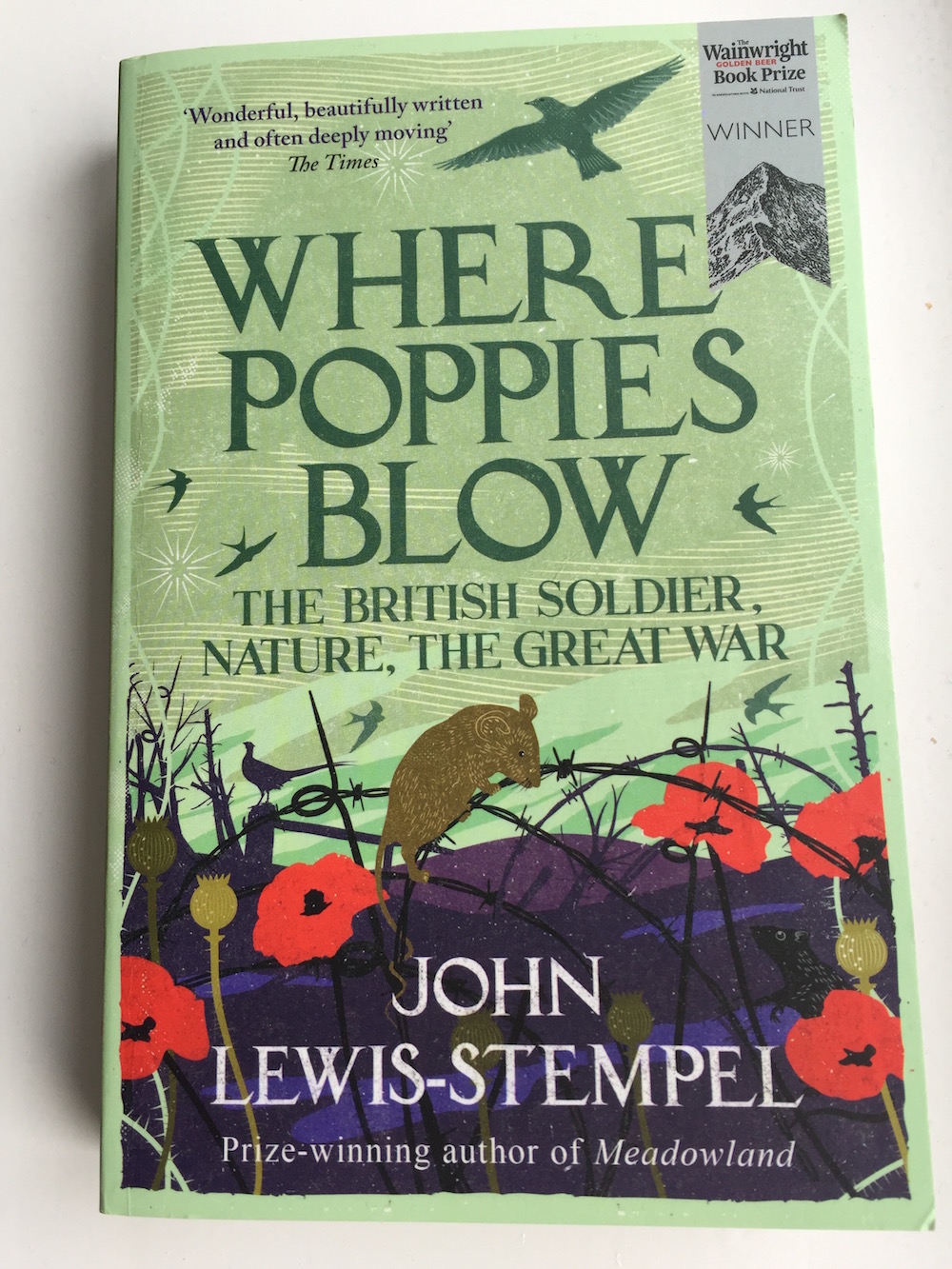 During the war soldiers lived inside nature. There was no escape as they lived and fought in trenches dug out of the earth. There are lots of references to the natural world in the poems written during the war and in letters written home to family members. Many said it was a love of the British countryside that encouraged them to volunteer.

One of these was the poet Edward Thomas. When he was asked why he had volunteered for service in the army, he scooped up a handful of English earth and said, ‘Literally for this.’  He wrote a poem called Adlestrop in 1916. The poem was about what he had seen and how he had felt, when the train he was travelling in stopped at this small station, a few months before the start of war. This is one poem that I can remember learning in school and have always loved it as it paints a clear picture of a moment in time on a hot summer afternoon.

Yes.  I remember Adlestrop—
The name, because one afternoon
Of heat the express-train drew up there
Unwontedly.  It was late June.

The steam hissed.  Someone cleared his throat.
No one left and no one came
On the bare platform. What I saw
Was Adlestrop—only the name

And willows, willow-herb, and grass,
And meadowsweet, and haycocks dry,
No whit less still and lonely fair
Than the high cloudlets in the sky.

And for that minute a blackbird sang
Close by, and round him, mistier,
Farther and farther, all the birds
Of Oxfordshire and Gloucestershire.º 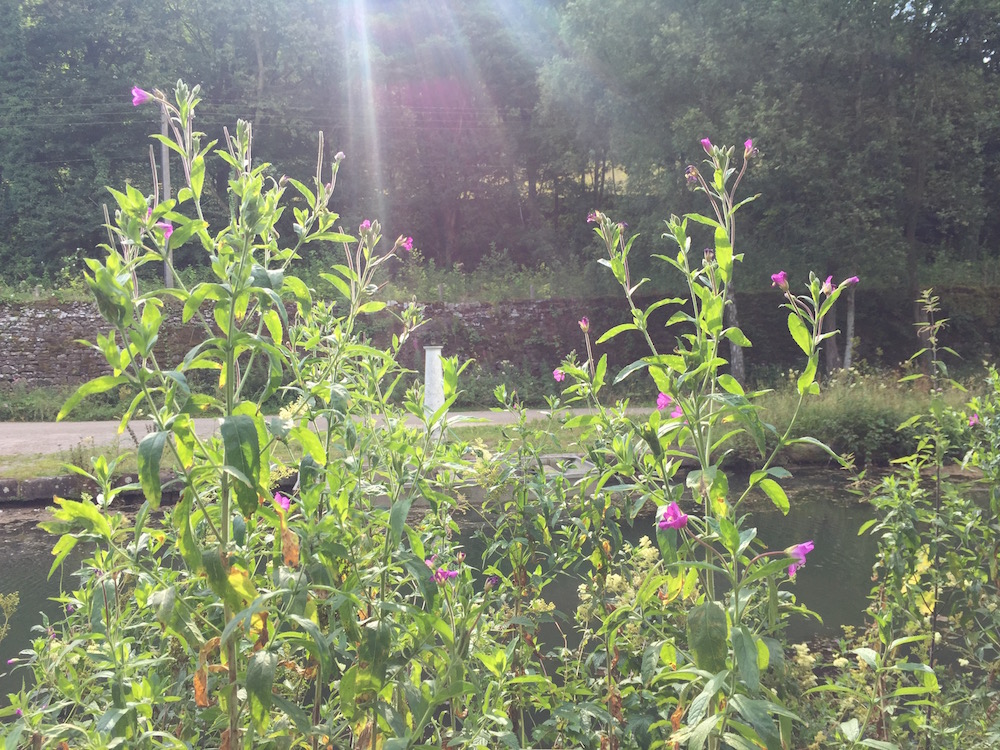 This poem was written in 1916 about a journey taken in 1914 a few months before the start of the First World War. Edward Thomas was killed in France in April 1917.

Birds of the battlefields gave soldiers a spiritual uplift.
Here is part of a letter home written by Robert Sterling of the Royal Scots Fusiliers.

‘I’ve been longing for some link with the normal universe detached from the storm….I did find such a link about three weeks ago. The enemy had just been shelling our reverse trenches, and a Belgian patrol behind us had been replying, when there fell a few minutes silence; and I still crouching expectantly in the trench, suddenly saw a pair of thrushes building a nest in a ‘bare ruin’d choir’ of a tree, only about five yards behind our line. At the same time a lark began to sing in the sky above the German trenches. It seemed almost incredible at the time, but now, whenever I think of these nest-builders and that all but ‘sightless song’, they seem to repeat in some degree the very essence of the Normal and Unchangeable Universe carrying on unhindered and careless amid the corpses and bullets and the madness.’

Bird watching was a popular hobby and lists were made of, ‘Birds seen on the British front line‘. Again there are many poems which include birds.

To a Skylark Behind Our Trenches
by Captain Edward De Stein

Thou little voice! Thou happy sprite,
How didst thou gain the air and light—
That sing’st so merrily?
How could such little wings
Give thee thy freedom from these dense
And fetid tombs—these burrows whence
We peer like frightened things?
In the free sky
Thou sail’st while here we crawl and creep
And fight and sleep
And die.

How canst thou sing while Nature lies
Bleeding and torn beneath thine eyes,
And the foul breath
Of rank decay hangs like a shroud
Over the fields the shell hath ploughed?
How canst thou sing, so gay and glad,
Whilst all the heavens are filled with death
And all the world is mad?
Yet sing! For at thy song
The tall trees stand up straight and strong
And stretch their twisted arms.
And smoke ascends from pleasant farms
And the shy flowers their odours give.
Once more the riven pastures smile,
And for a while
We live. 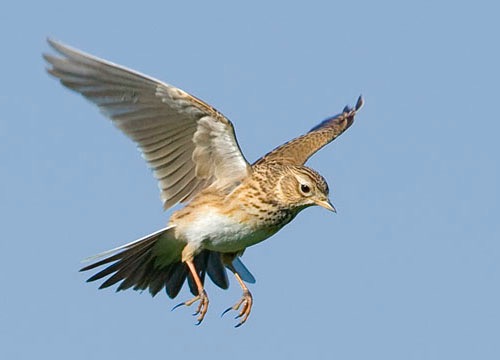 English Flowers in a Foreign Garden  by Lt Will Harvey

Snapdragon, sunflower, sweet-pea,
Flowers which fill the heart of me
With so sweet and bitter fancy:
Glowing rose and pensive pansy,
You that pierce me with a blade
Beat from molten memory.
With what art, how tenderly,
You heal the wounds that you have made!

Thrushes, finches, birds that beat
Magical and thrilling sweet
Little far-off fairy gongs:
Blackbird with your mellow songs,
Valiant robin, thieving sparrows.
Though you wound me as with arrows,
Still with you among these flowers
Surely I find my sweetest hours.

And of course the emblem of the Great War is a wildflower, the Flanders poppy. 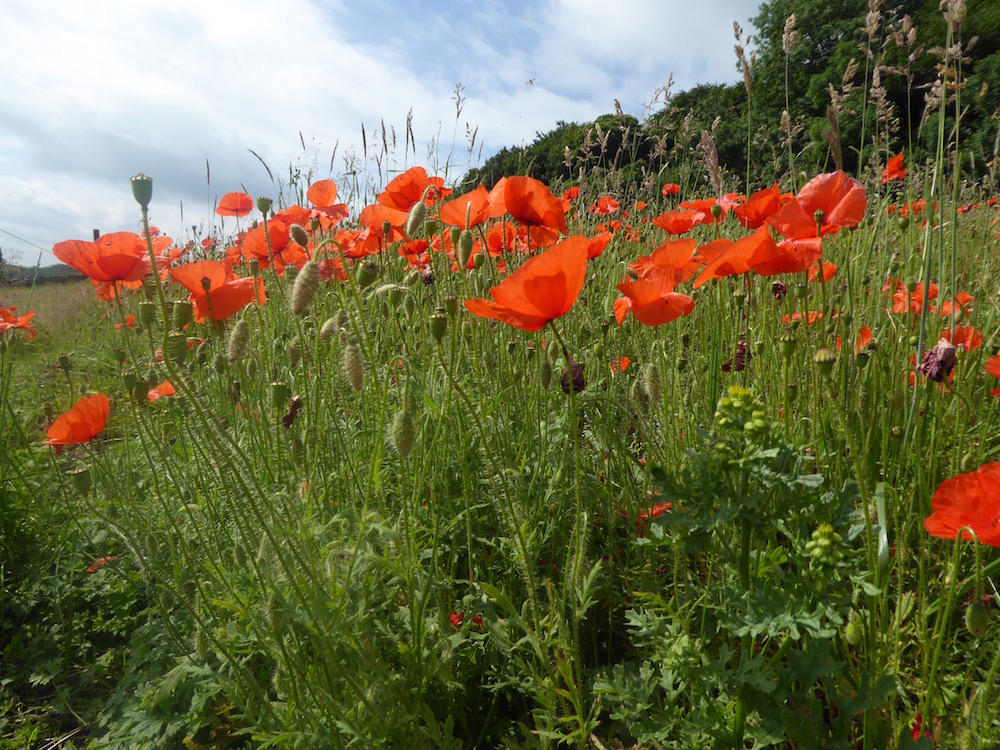 Red Poppies in the Corn by W. Campbell Galbraith

I’ve seen them, too, those blossoms red,
Show ‘gainst the Trench lines’ screen,
A crimson stream that waved and spread
Thro’ all the brown and green:
I’ve seen them dyed a deeper hue
Than ever nature gave,
Shell-torn from slopes on which they grew,
To cover many a grave.

Bright blossoms fair by nature set
Along the dusty ways,
You cheered us, in the battle’s fret,
Thro’ long and weary days:
You gave us hope: if fate be kind,
We’ll see that longed-for morn,
When home again we march and find
Red Poppies in the Corn.

I have placed a display in St Peter’s Church Belper with more information and I recommend the book, ‘Where Poppies Blow’ as a worthwhile read. To end this blog a couple of quotes from Private J.W. Graystone.

‘The woods looked simply glorious in the morning sun, and all nature was at its best. Fancy a war on in surroundings like this. It seems unthinkable.’
Private J.W. Graystone of his camp at Authie on the Somme.

‘How free nature is and what a call it makes to us in the Army! It makes us feel more and more how much we shall appreciate life when the war is over. No more being cooped up in smoky towns, spending our time in frivolous pleasures. Out into the country for us, but no army.’

2 thoughts on “Nature and the Great War”