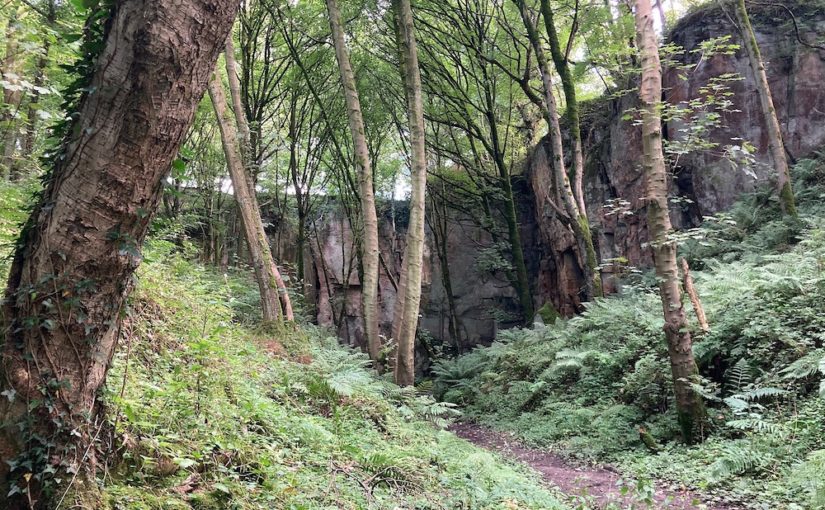 I love walking along the Cromford Canal and this year have also started to explore woodland near the canal. It is possible to park near the Cromford Canal at Whatstandwell or in a couple of small parking places along Robin Hood Road. This area has a cluster of old stone quarries which started to be worked over 200 years ago. Most are now overgrown with trees and other vegetation, one however, Middle Hole Quarry is still working.

Yesterday we started our walk from Robin Hood Road, walking through a gate and down towards the canal. At this point there is a bridge over the canal named Sims Bridge. There is also an open area which has been tidied up I think by the Wildlife Trust. On the right is a small wall and behind it what looks like an old rubbish dump. I didn’t see any plastic but old Denby pottery, meat bones, thick glass bottles and leather shoes etc.

We carried on walking straight ahead on a path that started to climb gently uphill and then crossed Robin Hood Road following a footpath signposted Wakebridge. The weather was sunny but the way through the woods felt pleasantly cool. To the right of the path was plenty of evidence of previous quarrying.

There is something magical about a wood on a sunny day and lovely to see shafts of sunlight through the branches.

Continuing to walk upwards we passed a stream, the trees cleared and the path continued on to Wakebridge. At this point we turned around but it is a walk we will enjoy doing again.

There is much more information about this area on the Derwent Valley Mills website.

Spending time in the natural world is so good for both physical and mental health.

I like to walk along the Cromford Canal and enjoy the wildlife, industrial heritage and numerous wildflowers. One of my favourite walks starts in the village of Lee where Florence Nightingale and John Smedley came from. Parking near to the Smedley factory the walk starts along the Nightingale arm of the canal. John Smedley Knitwear was founded in 1784 at Lea Mills, Matlock, Derbyshire by Mr. John Smedley and Mr. Peter Nightingale (Florence’s great-great Uncle). The Lea Mills factory is still John Smedley’s home, making it the world’s oldest manufacturing factory in continuous operation.

The construction of the Cromford Canal was completed in late 1794, to improve the movement of heavy goods in and out of Cromford. The canal soon became very busy moving thousands of tonnes of stone all over the country from Cromford Wharf. Lead was taken the much shorter distance to the smelter at Lea, using the Nightingale Arm of the canal. One of the most unusual of shipments was two stone lions, sculpted in Darley Dale  and then taken by canal to Liverpool, where they can still be seen standing by the entrance to St George’s Hall.

The Nightingale arm of the canal joins the main canal at the site of Aqueduct Cottage.

Aqueduct Cottage was originally built as a lengths-man’s and lock-keeper’s accommodation in 1802 by Peter Nightingale. It was necessary to have a stop-lock at the entrance to this arm of the canal and the operation of the lock needed to be supervised by a lock keeper. This is most likely the reason for the construction of the cottage in this location. The cottage was occupied until the 1970s but then gradually fell into disrepair. It is currently being repaired by the Derbyshire Wildlife Trust with the help of many volunteers. It will become a visitor interpretation centre, to tell the story of its history, the former people who lived there, and how these aspects related to a Derwent Valley landscape.

Once I have walked the short distance from Lee to the main canal I can choose to turn right and walk towards High Peak Junction or left towards Whatstandwell. On this occasion I turned left and this is a record of some of the flowers seen at the beginning of August 2020 along this stretch of canal.

All along the canal there is plenty of Meadowsweet, which is edible and can be used in similar ways to elderflowers. Once valued for its lasting fragrance; the dried flowers were strewn across floors to perfume the home, and was said to be Queen Elizabeth 1’s favourite scent, ‘for the smell thereof maketh the hart merrie’. It was also used in Anglo-Saxon times to flavour mead, and has had many medicinal uses. In the 1890s it was used to make acetylsalicylic acid later known as aspirin but unlike todays aspirin it is kinder on the stomach.

Along this stretch of canal there are several Guelder Rose and Bramble bushes, this year both have plenty of ripe juicy fruit.

The flowers and berries this year have been beautiful and seem more rampant than usual, maybe due to weather or less pollution because of lockdown.